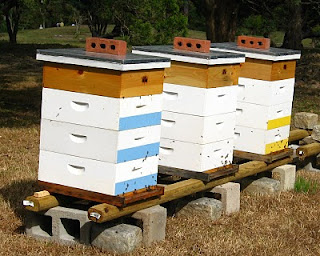 Along with chemicals found in the honeycomb and honey bee viruses, Nosema disease appears to be a contributing factor in the large-scale die-off of honey bees that has been occurring since the spring of 2007. Extensive studies of the bees are being undertaken to look at any possible sources of this die-off which is being called Colony Collapse Disorder. Nosema apis is a fungal infection found anywhere in the world that our honeybees of European descent are managed. Nosema is a spore-forming microbe that causes dysentery in honey bees. Honey bees don’t defecate inside the hive, and dysentery occurs when infected colonies are confined to the hive unable to make cleansing flights during extended periods of cold weather. Bees with dysentery leave feces on the outside of the hive. Nosema disease occurs in adult bees and is readily spread as bees consume the spores while cleaning out infected hive cells or by sharing food. Nosema apis is generally only a problem in regions with extremely cold winters. In the southern United States and throughout the tropics, Nosema disease is rarely a problem

Researchers studying honey bee health found that Nosema apis has been largely replaced by a more virulent strain of the disease, Nosema ceranae. This replacement of diseases is itself an unusual occurrence. Nosema ceranae is a disease of the Asian honey bee, a different species from our European honey bee. While the original Nosema was known as a rarely deadly, winter-time condition, the new strain is an around-the-year disease that is suspected as being associated with Colony Collapse Disorder. Fortunately, for the beekeeper there is good news; Nosema can be controlled by feeding sugar water treated with Fumagillin in either the fall or early spring. Placing bee hives facing the south where the sun warms the hive entrance encourages flying. Considerable advantage in fighting Nosema disease can be gained by regularly changing out old honeycomb, thus removing the disease-causing spores. Today’s photo shows hive-top feeders in use.
--Richard
Posted by Richard Underhill at 4:33 PM