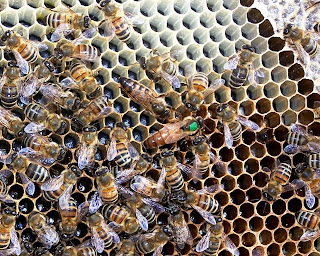 It is always nice to get a few breaks in the winter weather to check on the honey bees. Our success in helping the bees survive the winter can depend upon our opportunities to check on the winter stores of the bees and give them some emergency feeding as needed. The depth of these winter checks depends largely upon the weather. If it is cold and windy, opening the hive may prove deadly to the bees. On cool days we may open the hive briefly without removing frames, as the brood is vulnerable to chilling. However, we have enjoyed a few days of unseasonably warm weather, allowing good access to the bee hives for January. Today, with warm temperatures and still air, I was able to remove some frames for a more in-depth view of the condition of one of my bee yards. I found the bees congregated in the uppermost hive body of most of the hives. Brood was present in most hives indicating that the queens had started their egg laying for the year.

While I was taking a picture of the queen in one hive, a queen bee that I raised last year and marked with green paint, I noticed a second queen on the same frame. Normally honey bee queens do not allow another queen to share the hive; but in the early part of the year, a mother and her daughter queen may coexist in the hive. Click on the photo to see the two queens. Last year’s queen is marked in green. Her unmarked, darker colored daughter queen is next to her. While queen bees are often shy and run when exposed to the sunlight, both queens were quite docile and allowed me to observe them for a while. The two queens each appeared to be depositing eggs. Showing no aggression toward each other, the queens moved about the frame in close proximity; a number of times they touched.
--Richard
Posted by Richard Underhill at 9:00 PM