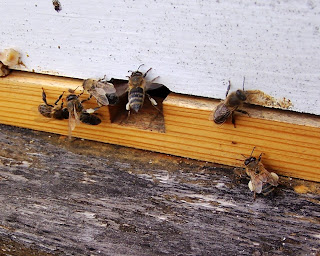 Honey bees break out of their winter cluster and fly when the temperatures rise to 50 degrees. A warm period brought the pollen foragers out in great numbers. The vast majority of the honey bees returning to the hives were carrying pollen. The presence of pollen being brought into the hive is a stimulus for the queen to lay eggs and produce brood. The brood production causes the worker bees to seek out more pollen. When I opened the hives, I found that the colonies have begun producing brood. Judging from the age of the brood it is evident that the queens were laying eggs even during early January when the temperatures were well below freezing for days on end. The beekeeper can tell the age of the brood by observing the different stages. Worker brood remains as an egg for three days. Next, the brood is a larva for six days. During this time, the larva will expand from a tiny c-shaped, worm-like creature to a large worm that fills the honeycomb cell. On the tenth day of brood development, the workers cap the larva with beeswax; and the bee develops for 12 days as a pupa.

The health and life expectancy of the young bees developing early in the year is largely dependent upon the quality of the pollen that they bring into the hive at this time. Pollen quality also affects worker bee gland development and helps determine the ability of the young workers to produce food for the next generation of bees. The bees do not have a mechanism for determining the pollen quality, and they often gather substitutes before flowers bloom in abundance. We can help our bees by feeding protein supplements in the form of pollen substitutes. We can also help ensure good bee health by encouraging weedy growth to provide a diversity of pollen sources. Most of today’s bees were returning to the hive with light gray colored pollen; others carried yellow pollen.
--Richard
Posted by Richard Underhill at 8:08 PM