Chemicals in the Environment 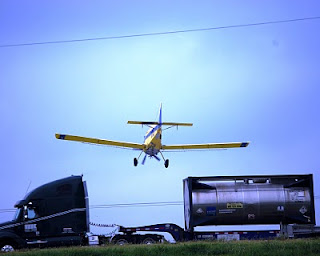 Researchers looking for the causes of honey bee Colony Collapse Disorder have found dozens of chemical agents in the beeswax honeycomb of affected bee hives. Beeswax readily absorbs and holds chemicals. The chemicals found include miticides used by the beekeepers to combat the parasitic mites that have devastated honey bee populations since they were discovered in the United States in the 1980s. The mites changed beekeeping from a craft in which chemicals were rarely used to one in which chemicals were used routinely. As could be expected, the chemicals found in the greatest concentrations are the common miticides, Fluvalinate and Coumaphos, both considered to be “harsh” pesticides. Other chemicals found in honeycomb included dozens of insecticides and pesticides. One insecticide being found in honeycomb is Imidacloprid, suspected by many beekeepers as affecting honey bee health. Imidacloprid, a member of a class of insecticides designed to be more environmentally safe than earlier products is often used to kill gnawing and chewing insects in lawns and crops. These insecticides are widely used in crop seed treatments, flea collars for pets, and home termite controls. In crops, Imidacloprid has a systemic action; it is carried through the vascular system of the plant, poisoning insects that chew the foliage. It is also brought back to the bee hive by bees foraging for nectar and pollen. Researchers are questioning the sub-lethal effects of this insecticide on honey bees.

There is considerable dependence today upon chemical fertilizers, herbicides, and pesticides for producing crops, growing lawns, and controlling termites. Genetically modified crops use herbicides to control weed growth, resulting in high-yield crop production at lower cost from reduced soil tillage. Concerned beekeepers, like us at Peace Bee Farm, are moving toward reduced chemical usage, avoiding “harsh” miticides in favor of “softer” agents, like those based on essential oils. In today’s photo, an agricultural applicator passes low over one of my bee yards then negotiates power lines and a passing chemical tanker to spray an adjacent field.
--Richard
Posted by Richard Underhill at 6:12 PM