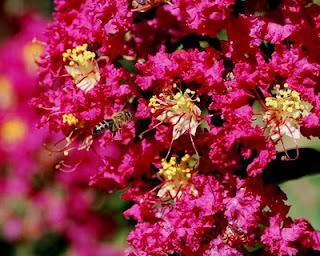 Varroa mites exist on almost every continent. Australia is probably the only location that does not have them yet. These mites are so damaging to the honey bee in the United States because the mite is not native to our bee. It is thought that Varroa jumped onto our honey bees, which are of European origin, from the Asian bee. Having lived together for a great length of time, the Asian bees and the Varroa parasites developed a working balance. If a parasite kills all of its hosts, it is doomed to die off as well. It is not practical to expect to be able to eradicate the Varroa mite. It is more reasonable to attempt to maintain honey bees that can live with the Varroa as the Asian bees do.

As beekeepers move away from using chemical miticides aimed at killing the Varroa mites, they are employing a number of integrated pest management techniques to reduce the numbers of mites in the colony. Some races of honey bees have been found to have behavioral traits that help them live with the mites. These honey bees can detect Varroa mites inside the capped brood cells. The bees open the cells and remove the developing pupa as well as the mites. Beekeepers can also dust the adult bees in the hive with powdered sugar to cause the bees to preen the mites off of each other. When the mites fall through screens at the bottom of the hive, they fall to the ground and are eaten by ants. Some essential oil-based mite treatments are being used in place of harsh chemicals to treat bees for mites. Beekeepers are adapting to the Varroa mites. Today’s photo is of a favorite shrub of the Mid-South, the crepe myrtle, which blooms throughout the summer and often attracts a great number of honey bees for nectar and pollen.
--Richard
Posted by Richard Underhill at 3:58 PM