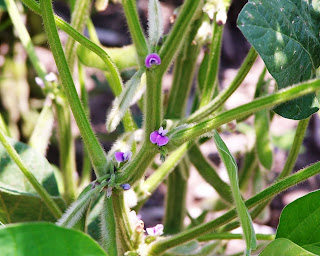 Nectar is flowing in the Arkansas Delta. The principal two honey plants in the region are soybeans and cotton. The soybeans are now in bloom in many of the expansive fields across the Delta. There is a continuous period of bloom for over a month due to the number of varieties of soybeans planted. Farmers plant varieties that mature at different times to stagger the harvest as well as take advantage of drought-resistant qualities of certain varieties. The result is a nectar producing season lasting several weeks for the honey bees in the Delta. The large acreage of soybeans accounts for the majority of honey produced in the region. Since it takes two million flower visits to produce one pound of honey, it takes many plants to produce a significant nectar flow. Those plants can be found in abundance in the Arkansas Delta. Soybean honey is mildly flavored and light amber in color. It is definitely one of my favorite honeys.

The soybean is a legume, an important family of nectar-producing plants. The legumes include a number of flowering trees including black locus, mimosa, redbud, and Kentucky coffee tree. Other legumes which are smaller plants and vines include the clovers, vetch, lespedeza, wisteria, kudzu vine, the peas and beans, and peanuts. The legumes are especially useful in the environment because many of them have bacteria growing on their roots that take atmospheric nitrogen from the air and fix it in the soil. The legumes thus enrich the soil in which they grow. To produce their seeds, the legumes must be pollinated by the bees.
--Richard
Posted by Richard Underhill at 4:02 PM