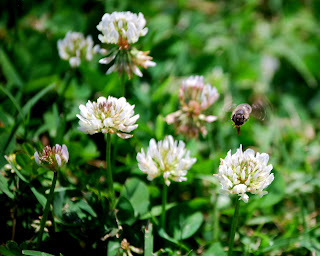 White clover is considered the most important honey plant in North America. White clover honey is also the honey by which all other honeys are compared. Clover is found in pastures as a major forage crop. Clover grows in abundance in lawns and along roadsides due to its strong vegetative vigor. This vigor is brought about by a strong root system, the presence of nitrogen-fixing bacteria on the roots, and the production of a large quantity of viable seeds. White clover secretes nectar in relation to the temperature. The greatest amount of white clover honey is produced on days when the temperature is between 80 and 90 degrees. As a result of variations in temperature, the plants don’t have to produce a profusion of blooms if the temperature is favorable. Likewise, a field white in blooms won’t produce much honey if the temperature is too cool or too hot. An improved strain of white clover popular with beekeepers is Ladino clover, a giant form that originated in Northern Italy. Beekeepers sew clover seed in any available plots in the fall when nighttime temperatures approach 60 degrees. Having clover in bloom helps assure success of queen rearing in the spring. There is nothing more conducive to queen rearing than a good nectar flow.

Clover belongs to the important family of bee plants, the legumes. This is the same family that includes soybeans and peanuts. A greater quantity of honey is obtained from white clover than from any other plant in the world. White clover honey is light in color; it has a delicate flavor and aroma; and it is slow to granulate.
--Richard

Posted by Richard Underhill at 7:15 AM