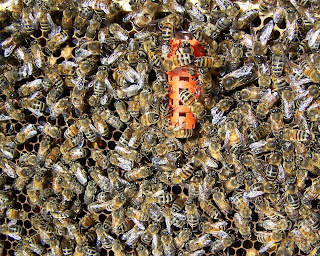 Just as the honey bees divide their colonies in the process of swarming, beekeepers often divide their colonies by splitting the hives. Splitting is done to increase the number of hives the beekeeper is managing. It is also done as a measure to help prevent the bees from swarming. Actually, the technique is a form of artificial swarming. To split the colony, the beekeeper physically moves part of the hive—bees and frames of comb—to another hive in a different location. A new queen is added to form the second colony in the new location. This is very similar to what occurs in nature; two smaller colonies are formed, each with its own queen.

Click on the picture and you can see a hive split being made. I have inserted a new queen cell in the portion of the hive that has been moved. The queen cell is located in the orange-colored plastic protector. The protector is designed to help prevent bees from killing the queen before it emerges from her cell. The comb is covered with mostly young nurse bees that will feed and tend to the queen when she emerges from her cell in the protector. The larger bee to the right of the protector is a drone. Splitting hives helps control swarming in managed hives by giving the bees the appearance that their colony has already swarmed.
--Richard
Posted by Richard Underhill at 10:11 PM